Touring France and Germany with These Two Books

“Despite everything, Ruby had loved living in Europe.

She loved having history envelop her as she strolled the streets; she loved the French word ‘flaneur’ – to amble along or to hang around. It applied here (Germany), too – you could stroll until you came across the perfect cafe or Biergarten and then just sit and absorb the sights, sounds and smells.”

This month, I am back in Europe, exploring more of France and for the first time, 1980s West Berlin through the eyes of Toronto, Ontario 20 something Ruby Edwards. 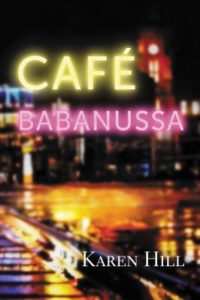 Cafe Babanussa inspires you to find the beauty in Berlin.

Cafe Babanussa by the late Karen Hill follows the story of Ruby, who is of mixed race, leave her family behind to live the life she wants in West Berlin. Ruby sees racism, embraces love and friendship, experiences mental health issues and finds the meaning of being black. She also explores Europe, landing in France before travelling to Germany.

“Ruby had chosen a simple pension (residence) on Rue de Nesle on the Left Bank, and she admired the quirky decorations and artwork when she arrived to drop off her bags. There was no restaurant or cafe at the hotel, so she walked down the cobblestone road, which burst out onto a large square. She happily noted there were at least four cafes with patios stretching into its hub. She sat down at La Pleine Lune and soon she was munching on a chocolate croissant and sipping a grand creme as she took in her surroundings.”

Ruby spent time in Paris, in the Jardin du Luxembourg, feasting on the bright colours of the gardens, and visited the Pere Lachaise Cemetery, the final resting place of the famous, including Jim Morrison. Ruby also saw Notre-Dame and had a picnic, complete with cheese and baguettes, on the banks of the Seine.

After passing the Berlin Wall – “she noticed a grey slab of concrete looming behind a tall barbed-wire fence. There it was. So plain, so simple, so ugly”- the train headed to the city through a dense forest.

“The leaves on the trees were a vibrant shade of green, and tree branches stuck out from every which way as they coursed along the rails toward the city.

“’This is the Grunewald,’ Werner told her. ‘Berlin has the largest urban forests in all of Europe.’ Ruby felt this was the most appropriate for a city enclosed by a wall. Soon she was taking in the beauty of the cityscape that was gliding by her window, so different from the harsh regime that surrounded it. Church spires, intricate and colourful facades adorning tall buildings, a gilded palace. Against the grey hues, the place radiated a melancholy elegance.”

Werner tells Ruby the house he lives in are called the Hinterhaus or the backhouse, where courtyards were built so a horse and buggy could come in, turn around and go back out – something found only in Berlin.

In 1980s West Berlin, houses were heated by coal, which Ruby noticed by smell as soon as she got off the train.

For the first little while, Ruby was a tourist and as such, we got to explore West Berlin with her – walking everywhere, checking out Tiergarten, a vast park in the middle of the city with old trees and bike paths, the Hansaviertel, a community built around a square, flea markets, where Ruby eventually finds pieces to fill her home, the National Gallery with Fernand Leger’s The City painting “the primary colours vibrated off the canvas; bold, cubist shapes that only vaguely resembled a skyline” and celebrating Christmas with real candles on Christmas tree and house that smelled of pfeffernusse and people popping by bringing gifts of homemade fruit wine and plum schnapps. 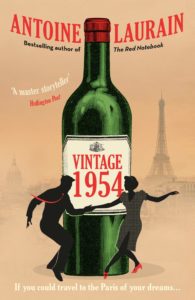 You get to experience 1950s Paris and today in this book by Antoine Laurain.

Meet the main character’s in Antoine Laurain‘s Vintage 1954 ($14.95, PGC Books) an American named Bob, who, in 2017 ,finally makes it to Paris and is renting an Airbnb at 18 Rue Edgar-Charellie, a building created on the remains of the Saint-Martin Abbey, which had been destroyed during the French Revolution. The location is also home to Magalie Lecoeur, Julien and Monsieur Larnaudie, whose family has owned the building since 1868 (“And so on back to the time of Napoleon III. I’m a true Parisian, and that’s rare these days.”).

The four become friends after Monsieur Larnaudie gets locked in his cellar, found by Bob and is rescued by the other two. The group enjoys a vintage bottle of wine (“the best product of France”) from 1954. When they wake up the next morning, they realize they have been transported back to 1950s Paris.

While the Parisians understand immediately they are in the past, Bob, who has never been to their city before, takes a bit longer, thinking Paris is a bit old-fashion, resisting the march of technology.

“When he arrived at Pigalle station, Bob came out into the square and took in the sight of the Moulin Rouge breathing the city air in lungfuls before heading down Rue Lepic…He passed the Cafe des Deux Moulins, the setting for Amelie…” Bob has a coffee at a bistro and watches a discussion between French photographer Robert Doisneau and French novelist Marcel Amye.

The four friends all meet up at Harry’s Bar, where the Bloody Mary was invented (as well as the French 75, the Sidecar and the Blue Lagoon), and where Julien works – in the past and present.

Once Bob understands that he has gone back in time, he continues visiting the places he came to see – the Palais-Royal gardens, La Galerie Vivienne, the Basilica of Notre-Dame-des-Victoires, the Church of Miracles and the Eiffel Tower. He also visit the Louvre , and although he is disappointed he doesn’t get to see the pyramid, other things make up for it.

“She smiles enigmatically against a background of lakes and mountains. She smiles, her small hands resting in front of her, and you almost want to look behind you to see who on earth she is smiling at like that…Bob looked at Lisa Gherardini, known as the Mona Lisa. She was not behind bullet-proof glass back in 1954…She simply hung in the gallery amongst all the other paintings. And remarkably, Bob was one of the only visitors to the beautiful Florentine that afternoon.”

A copy of Vintage 1954 was provided by PGC Books for an honest review.
The opinions are my own.

A Gentle and Insignificant Paris Rain.

The 9 Best Travel Experiences Around the World