Savouring the Sights and Tastes of France and England

to soak up the beauty of its landscapes, but also enjoying the food and culture of both Paris and London. 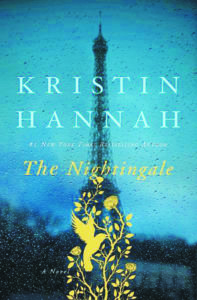 The Nightingale by Kristin Hannah shows the beauty of France before and after the Second World War.

The Nightingale:  Set in France

Set in both in Paris and Le Jardin – the Nightingale begins and ends in 1995, but the middle of the book is set during the Second World War as France gets swept in up the evil that was Nazi Germany.

When we first arrive in France, we meet Vianne, her husband Antoine and their daughter, Sophie, a happy family who love their home and the life they have created.

“Vianne joined (Antoine and Sophie) on the dirt road in front of their home…Beyond it stretched acres of hay fields, the green here and there studded with red poppies and blue cornflowers. Forest grew in patches. In this corner of the Loire Valley, fields were more likely to be growing hay than grapes. Although less than two hours from Paris by train, it felt like a different world altogether.”

While the family calls Le Jardin home; Carriveau – mostly known “as a stopping point on the pilgrimage of Ste. Jeanne d’Arc” is nearly a mile away from their home and sounds wonderful.

“In town, narrow cobblestoned streets wound through ancient limestone buildings that leaned clumsily against one another. Mortar crumbled from stone walls, ivy hid the decay that lay beneath, unseen but always felt…Colors enlivened the stone buildings: red awnings ribbed in black metal, ironwork balconies decorated with geraniums in Terra-cotta planters. Everywhere there was something to tempt the eye: a display case of pastel macrons, rough willow baskets filled with cheese and ham and saucisson, crates of colourful tomatoes and aubergines and cucumbers.”

And you can’t be in France without going on a picnic.

“At the end of town, they turned toward the river. At a flat, grassy spot along the shore, Vianne set down her basket and spread out a blanket in the shade of a chestnut tree. From the picnic basket, she withdrew a crusty baguette, a wedge of rich, double-cream cheese, two apples, some slices of paper-thin Bayonne ham, and a bottle of Bollinger ’36.”

Paris, with its sandstone buildings, black ironwork balconies, and slate roofs, and of course the Eiffel Tower gets mentioned during wartime, but it’s the modern-day Paris we see toward the end.

The main character and her son, an American who has never been to Paris before, stroll along the sidewalk, walking among tourists and locals out enjoying the sunshine and the scent of chestnut blossoms, baking bread, cinnamon, diesel fuel, and baked stone “smells that will forever remind me of Paris” and finding so many things to do in Paris.

The mother buys her son his first macron – coconut and raspberry “Wow,” he says and the mother thinks to herself: “Everyone remembers their first taste of Paris. This will be his.” The pair enjoy a glass of wine and greasy frites at a bistro overlooking the Seine (just past 5 p.m., the genteel cocktail hour) and watch the vendors in green kiosks selling everything from oil paintings to old Vogue covers.

The pair walk to the Pont Neuf, the oldest bridge across the Seine, and look beyond it at the Ile de la Cite, the island that once was the heart of Paris.

“Notre Dame, with its soaring chalk-coloured walls, looks like a giant bird of pretty landing, gorgeous wings outstretched. The Seine captures and reflects dots of lamplight along its shores;.” The son, Julien, calls it magic.

The mother herself remembers Paris:

“I had forgotten how gently time passes in Paris. As lively as the cit is, there’s a stillness to it, a peace that lures you in. In Paris, with a glass of wine in your hand, you can just be.” 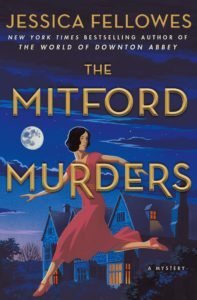 The Mitford Murders will inspire you to travel to the sea, eating chips and scones – but not together.

We Spend Some Time in London, England in The Mitford Murders

We go further into the past for Jessica Fellowes‘ The Mitford Murders ($23.99, Raincoast Books, Minotaur).

We wander London, England, before hopping aboard a train with 18-year-old Louisa, who escapes her uncle while, and like the young woman trying to escape poverty she watches the “disappearing London skyline…It wasn’t long before (houses give) way to Sussex‘s flat fields and stubby brown earth, neatly divided from the pale sky by even lines of hedges. Farmhouses were dotted both near and far from the train line…Emerging from the first tunnel, Louisa couldn’t help but admire the sight of a group of brown and white cows laying together in the corner of a field with a single bull standing before them, like a lazy parliament and its prime minister.”

Louisa finds herself employed as a nursery maid by the Mitfords in the Oxfordshire countryside of England before heading to the sea and a charming tea shop.

“The others were enchanted at the thought of Rosa’s teashop with its scones and steamed-up windows, the sea that was too cold to swim in but just about bearable for paddling, the caws of the seagulls and the exotic taste of salt in the air.”

There is something about the sea that seems so beautiful and wonderful.

“The children walked along the beach every morning. Decca and Unity stopping frequently to inspect underneath stones…Pamela spent many agonizing minutes watching mysterious creatures in rock pools squirm away from Nancy’s net as she fished hopelessly.”

The children and their nursery maid rush back from the beach and enjoy scones with the “sweetest raspberry jam and thickest clotted cream” and Louisa, herself, sits on a bench overlooking the sea, enjoying a “bag of hot chips, each one covered in salt and the sharp tang of brown vinegar.”

France and England: you can almost taste it all!

A copy of these books was provided by Raincoast Books for an honest review.
The opinions are my own.