The more I read about Japan, the higher the country – its history, culture, and beauty – inches up on my travel list.

The Woman in the White Kimono by Ana Johns ($33.50, HarperCollins Canada) sweeps readers back to Japan to the late 1950s when its younger Japanese generation – especially its young woman – fight those original traditions and superstitions and are left with the consequences, to the present day when we see what happens to future generations. 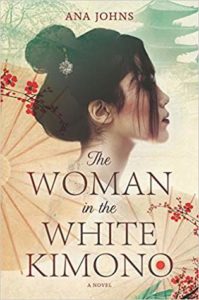 Beauitful read in The Woman in the White Kimono.

The story flips between 1957 when 17-year-old when Naoko Nakamura falls in love with an American sailor against her parents’ wishes and present day when Tori Kovac is caring for her larger-than-life dying father and finds a letter, which forces her to challenge everything she believes.

By flipping from 1957 Japan to present day, we get to see what it was like to live in the Japan past with its rules including its tea ritual

“Haijme knows the importance of showing up at the precise moment, not a minute early or a second late. He knows how to walk along the dewy garden path sprinkled with water to rid himself of worldly dust and to approach the middle gate for official introductions before tea.”

And the traditions of marriage.

“We bow to our ancestors, to our guests and to each other. Then we partake in the three-by-three exchange with three different-sized bowls of sake. Each one represents the inseparability of the newly formed bond with an earthy taste like moss kissed from dew. Just as in marriage, not all things endured are pleasant.”

We learn about a giant anchor at the front of Womble Gate, The Little Girl with Red Shoes On statue, Zushi, a small seaside town with a traditional house that time forgot with curved, clay roof tiles to “ward off evil spirits because demons only travelled in circles…”, its beautiful beach and the Miura Peninsula, known for its broad and rugged coastline with Mount Fuji in the background and Yokosuka’s blue street, “a dark asphalt street with embedded blue and white stones that sparkled like a river of light. No wonder he stooped down to touch them, even in the photos it gave the illusion of movement.”;

Through Tori’s father’s stories, told in a way that Tory never understood if they were more embellishments than truth, she learns about the Great Divide, which separates the east and the west, the International Date Line.

“He said they followed the north star on…a giant wave. That the groundswell travelled so fast it slammed them into the massive gates that separated the west and the east. ‘They rose from the heart of the sea and extended to the heights of heaven,’ he’d say. ‘And with our ship pinned against them, the court of King Neptune himself tested our valour for days.”

Eventually, Tori follows her dad’s footsteps, landing at the airport an hour outside of Tokyo, the world’s most populated metropolis and one that shocks the well-travelled Tori.

“The high-speed rail cut through marshy fields of rice and expansive rows of green, skirting the edges of sleeping village towns that, according to my travel app, were saturated in history. In one, a Dutch windmill surrounded acres of seasonal flowers – a goodwill gift from the Netherlands to celebrate 400 years of trade. Another was the hidden city of Samurai. Had my father stopped to see the castle ruins? Did he walk the secret paths and tour the few remaining homes of those sworn to protect it.”

As Tori steps out into Tokyo, she is surprised how European it looks.

“Buildings covered every inch of land and people crowded every space between them. There were more vending machines than trees and while the city itself gleamed spotless and trash free, the sky was littered with billboards. I leaned back trying to imagine their neon at night.”

Tori is intrigued by the electronic bird chirping and the blue lights flashing as she crossed the street, both in place to decrease suicides.

We also learned what the Japanese fear in the 1950s and perhaps today.

“For in Japan there are many fearful things under the sun: the great earthquakes that bring down entire cities, deadly thunderbolts from an angry sky, raging winds of a lethal fires and the father. The last is not the least.” 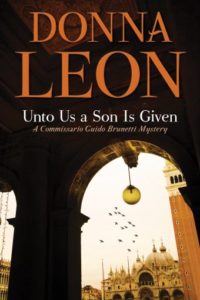 Experience every day life in Venice with this book.

Through Donna Leon’s Unto Us a Son is Given ($38.95, PCG Books), I want to travel to Venice, but am not sure I would actually want to live there as there seems to be, at least in this book, so much that is not said or perhaps said in a certain way. It’s like you can’t just be yourself because there are centuries of history you need to remember before acting or speaking. Or maybe that is just for the older, rich class.

Maybe the Venetian family wonders if the warm weather will ever show up, shops daily at the market, picking up a kilo of fresh asparagus and some prosciutto to craft delicious dishes to be enjoyed outside with family.

The main character in Leon’s book, Det. Guido Brunetti, the subject of 28 books before it, deals with that intrigue throughout the story, but at the same time we see a man who walks home from work to enjoy a mid-day meal and strolls through the beautiful city enjoying sites he never seems to take for granted such as the view outside his home’s window and the scenery he passes on the way to work and the sounds of bells ringing in the distance.

When his father-in-law asks him to stop by on his way home from work “Brunetti’s first response, given that it was a warm day in early spring, had been to calculate the easiest way to walk from the Questrura to the palazzo without becoming entrapped in the now normal migration paths of the herds of tourists. Because of the clear sky and benevolent temperature, walking up Riva degli Schiavoni would be impossible, crossing the Piazza San Marco an act of madness.”

We learn the only normal migration Venetians like is the return of the birds and their Venetian gossip.

“’I don’t like gossip’,” il Conte insisted, recalling Brunetti’s attention. ‘Never have.’ “’Then you’re living in the wrong city,’ Brunetti replied mildly, smiling as he said it to remove the sting. ‘And probably should avoid speaking to other Venetians.’”

A copy of these books was provided by HarperCollins Canada and PGCanada Books for an honest review. The opinions are my own.

Four Books to View the World in a New Way