I am itching to go away,

so this month I am travelling to locations I have never been before, cruising to Australia with many romantic and exotic stops in between. 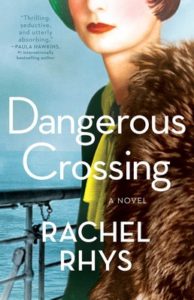 Like main character Lily Shepherd, we get to see amazing places as we head to Australia.

Much like main character Lily Shepherd, Dangerous Crossing by Rachel Rhys ($35, Simon & Schuster Canada) allowed me to travel to places I have only dreamed about with the added bonus of not being felled with without severe motion sickness, which happened to most of the passengers who were on the ocean liner from Essex cruising to Australia.

Lily, who is fleeing her past and heading to 1939 Australia to work as a domestic helper, and her fellow passengers, whom Lily learns are running from their own pasts, make stops in Naples, Cairo, and Ceylon before eventually arriving on Australia‘s shores.

One of the first stops is Gibraltar, which despite being a British colony feels – and smells – exotic.

“Lily has seen photographs, but nothing has prepared her for the first sight of that great slab of rock looming up like a gray iceberg from the blue glass of the Mediterranean sea…..As they draw closer to the harbor, Lily can see what looks like a flotilla of small boats and wonders if they are fishermen. But when the Orontes drops anchor and the boats surround them she realizes they are full of local people selling everything from fruit to lace – items that they send up to the passengers in brightly coloured baskets.”

While on the island, Lily and her new friends explore the market stalls, experience their famous monkeys, see the Government House that used to be a friary, and hear about the Lady in Gray, who, legend has it, was punished for attempting to elope with a man who family didn’t approve of being walled up alive in a room.

While in Naples, the friends tour Pompeii and “Lily is silenced by the feel of the place, the bones of the city so perfectly preserved, its secrets open to view nearly two thousand years after it was destroyed, and by the sinister, looming presence of Vesuvius in the distance, belching out smoke.”

Through the passengers’ eyes, we see inside the houses to the perfectly preserved bodies inside, their faces contorted by fear.

“There is a man reclining on a marble slab, naked apart from a fig leaf posthumously applied to cover his modesty.”

The tour guide suggests the ladies look into a house with cooking things, taking the men elsewhere. Lily doubles back to see what they see, only to find out it’s a brothel with people caught in moments of action.

In Cairo, Lily and her friends are awed by the size of the pyramid – inside and out – and the feelings of unease found without the King’s Chamber

“Doesn’t it make one feel small,” (Edward) says softly. “Imagining all the people who have looked on this same sigh over the last five thousand years and all the ones who will come after us? Makes all one’s personal, private horrors seem insignificant, don’t you think?”

The ocean liner sails close to the equator where “gone are the long, languid sunsets of earlier in the voyage when the sun would sink lazily into the horizon in a blaze of colour. Now there is only day, and then, as suddenly as if a light has been switched off, it is the night. And what a night it is, with the constellations on the Southern Cross sparkling like diamonds above the black line of the horizon,” Cocos Islands, beautiful but desolate and remote and a couple stops in Australia before landing in their final destination – Sydney.

“The ship swings past South Head, keeping close to land. A mile away, North Head marks the other gatepost into Sydney Harbor. …Lily can’t help feeling awed by the sheer scale of the scenery, all the small bays and inlets with their pockets of golden sand, the houses nestling between the trees, their tiled roofs sparkling where they catch the newly risen sun.” 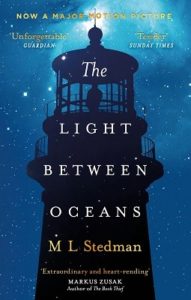 The Light Between Oceans is a beautifully written book and inspires me to travel to the point where the Southern Ocean meets the Indian Ocean.

The Light Between Oceans

Just where the Southern Ocean and the Indian Ocean meet, is where M.L. Stedman’s The Light Between Oceans is set although Janus Rock, where Tom Sherbourne, who has just returned from the frontlines of the First World War, becomes the lighthouse keeper doesn’t actually exist, according to an author interview at Book Page.

“But the region where the Great Southern Ocean and the Indian Ocean meet is real, and the climate, weather and the landscape are more or less as I’ve described them. I wrote some of the book there: It’s a very beautiful, if sometimes fierce, part of the world,” she said.

The nasty snakes, spiders, and scorpions are also real and get mentioned more than may be necessary for such a beautiful book, which inspires me to travel to this location and soak up its beauty.

“From the side of the side of the island, there was only vastness, all the way to Africa. Here, the Indian Ocean washed into the Great Southern Ocean and together they stretched like an edge-less carpet below the cliffs. On days like this it seemed so solid she had the impression she could walk to Madagascar in a journey of blue upon blue. The other side of the island looked back, fretful, toward the Australian mainland nearly a hundred miles away, not quite belonging to the land, yet not quite free of it…”

While Janus Rock doesn’t exist, the Cape Leeuwin Lighthouse exists and I would suspect the view Tom sees might be similar: “For the first time he took in the scale of the view. Hundreds of feet above sea level, he was memorized by the drop to the ocean crashing against the cliffs directly below. The water sloshed like white paint, milky-thick, the foam occasionally scraped off long enough to reveal a deep blue undercoat. At the other end of the island, a row of immense boulders created a break against the surf and left the water inside it as calm as a bath. He had the impression he was hanging from the sky, not rising from the earth.”

In a letter between Tom and Isabel, who eventually marries Tom and comes to the island, Tom writes about the beautiful sunrise and sunsets:

“And the stars: the sky gets crowed at night, and it is a bit like watching a clock, seeing the constellations slide across the sky. It’s comforting to know that they show up, however bad the day has been, however crook things get….it puts things into perspective – the stars had been around since before there were people. They just kept shining, no matter what was going on….”

A copy of Dangerous Crossing was provided by Simon & Schuster Canada
for an honest review. The opinions are my own.

The Day of Silence – Happy Nyepi!

Campervans and Kangaroos in Yamba, Australia