Spain and Cyprus: Books to Inspire Your Travel

While we have (happily) been enjoying an unusually warm and sunny November,

I am doing what many Canadians do at this time of year – planning and plotting for warmer climates. For me, it’s through these two books. Join me as I take a literary travel hop from Cyprus to Spain! 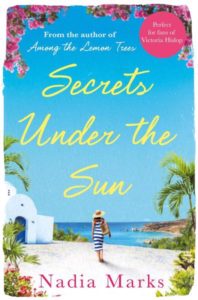 Books for Cyprus: Secrets Under the Sun

This is the second book author Nadia Marks (Publishers Group Canada, Pan MacMillan) has written that has inspired me to put this area of the world on my list of travel destinations. The cover, too, provides a burst of sun and warmth and fills me with happiness and a longing to be right on that beach.

The inside is just as beautiful, both in location – mainly in the town of Larnaka on the island of Cyprus – and the story of three childhood friends who come back to their hometown for the funeral of their much-loved surrogate mother, Katerina, but learn more about each other and the generations of women who raised them.

Through the pages of this quick read, we learn about “infernal heat” that apparently is common in Cyprus in July and almost taste the traditional treats baked in Katerina’s kitchen.

“The young Eleni, holding a wooden spoon, was poised over a large bowl filled with the sweet, sticky, crunchy mixture, eager to start the next stage. That part, she remembered vividly, was her favourite. The chopped walnuts, pistachios and almonds, sugar and honey fragrant with cinnamon and ground cloves: a heavenly mixture of edible delight for the young girl…’After baklava, can we make Mama Sonia’s koulourakia?’ she would ask, eager to continue in the blissful atmosphere of the kitchen with all its aromatic treats. Sonia’s famed koulourakia were delectable almond cookies sprinkled with rose water and dusted with icing sugar…”

Nicosia is known as the city of the rose.

“Roses of all types grew in abundance everywhere, their pungent aroma almost overpowering.

The monks who tended the gardens with care also produced great quantities of rose water from their crops, which they used in cooking and religious ceremonies, as is the custom in the Greek Orthodox Church. ‘What a delightful garden, Martha dear,’ Eva told her friend as she bent down to inhale the fragrance of yet another variety of roses. ‘So much colour, so much beauty! This garden satisfies almost all my senses. Sight, smell and touch, and all these bees are music to my ears…'”

Through the family’s older generation, we see the high Venetian wall that surrounds Nicosia, the labyrinth of narrow streets, the monastery and various architectural styles. We also visit Lefkara and learn about its traditional embroidery and lace making (“According to legend, Leonardo da Vinci himself visited the village during the Venetian occupation of Cyprus, and he took back with him a lace cloth for the main altar of the Duomo di Milano.”) Through the book spends time in Athens, seeing old ladies hang washing from the lines, pots of basil and geraniums and all the history including the Acropolis and Syntagma Square. 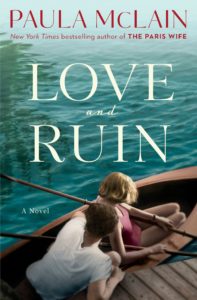 The beauty of Spain and its people come alive in Love and Ruin, a Novel.

Books for Spain: Love and Ruin

While Love and Ruin by Paula McLain ($32.95, Doubleday Canada) is set in 1937 when 28-year-old Martha Gellhorn travels across Spain, eventually making it to Madrid, to report on the atrocities of the Spanish Civil war and then meeting and falling in love with Ernest Hemingway, there is also beauty within the pages and a strong desire by the characters to ensure Spain is protected.

“For two days, we bumped along with a large caravan of vehicles on a coastal road, sloping, climbing hills, now and then coming to small villages that appeared all but deserted. In the distance, I could see the Mediterranean, bright and hard and blue, sometimes flat looking as starched cloth, and sometimes whipped and angry. North across the span of water, I knew, was the Cote d’Azur, that sun-drenched paradise…That place had been beautiful beyond words but also seemed like confection now, compared with Spain.”

McLain describes Madrid and the journey to get there: “Madrid was several hundred miles northwest over the coastal range and across the great plateau, La Mancha, flat brown fields that went on and on, possibly forever, full of trees and goats and the kinds of windmills the Don Quixote had flung himself at. It was mountains and broad, rolling in every direction, and there was a sense, as your drove, of how old it was, too, how full of history.”

We see various historical buildings and famous landmarks that have changed or been damaged because of the war, but we also see the desire to protect them and to tell people why Spain was worth fighting for: “I didn’t know what to expect (despite being in the city many times before), only that it seemed important to come.”

And despite the war, Martha discovers many great people, particularly Spaniards themselves.

“’He seems to have such a good, rich heart, even in the midst of all of this’,” Martha says to Ernest. “’They all seem to have that, these people. It’s something about being connected to each day as it comes. You should see all this during fiesta sometime. Spain knows how to be alive like no other country’.”

A copy of these books was provided by PGC Books and Penguin Random House Canada for an honest review. The opinions are my own.