July – it’s a month of celebrations – Canada Day on July 1 and Independence Day for our neighbours in the south July 4.

This month, we are celebrating two nations’ days by reading our way through Toronto, Montreal, and 1930s Kentucky.

In the Chai Factor by Farah Heron ($22.99, HarperCollins Canada), Amira Khan is just about done grad school. She comes back to her grandmother’s Toronto home to work finish her paper in the quiet of her basement apartment to discover her grandmother has rented it out to a barbershop quartet, who are practicing for an upcoming rehearsal.

While a small town north of Toronto gets mentioned in this book, Toronto has centre stage and Heron, who calls Toronto home, describes the city perfectly.

“The giant maze of hallways and escalators of Toronto’s Union Station was a nightmare to navigate on the best of days, but in the early hours of the evening rush, it was a sea of people as well.”

We spent a lot of time on Toronto’s transit system as Amira takes the TTC, its subway and streetcar, from place to place including its downtown waterfront.

Amira also spends a lot of time within Toronto’s public library system including the Toronto Reference Library, the “perfect place to lose a couple of hours in research.”

We get to hang out in the Sparrow, a local haunt, which in real life is now closed, but during the book Amira and her friend Reena hang out there frequently. “It was the kind of place with brewed coffee at all hours and decent beer on tap. And a killer Sunday brunch.”

There are a lot of Canadianism in the book.

“Reena giggled again. ‘All right, all right, sorry, Meer. No boyfriend, just school work. But you have to admit, this is funny. A gay, Muslim, lumberjack barbershop quartet living in your basement. You couldn’t make this up if you tried’…”

The Canadian apology: “Years with a temper worse than Hades’ meant she knew when to grovel, and being born and raised in Canada meant she knew how to apologize.”

“The sun was setting over the horizon, bathing the sky in a rosy, almost otherworldly glow. There was nothing Amira loved more than Toronto in the spring. She was born and raised in the city, and she loved that her home was the kind of place with a Peruvian coffee house next to an Afghan Kebab shop, next to a Jewish deli wafting with the scent of bagels from a wood-burning oven.” 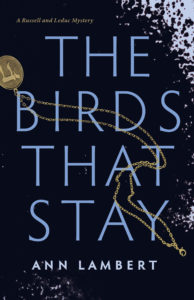 The Birds That Stay is set in Montreal and surrounding towns.

The Birds That Stay

In Ann Lambert’s murder mystery The Birds that Stay ($19.95, Second Story Press), set in Montreal and the towns surrounding the city, we learn the history of some of the place names including Ste. Lucie, “the village of eight hundred or so souls about six minutes from her house and an hour northeast of Montreal, was named for a fourteenth-century saint who blinded herself because she could not bear to witness all the sins in the world. Or she popped them out herself to discourage a persistent suitor, having sworn to preserve her virginity, of course. Every July, a few hundred Italian Montrealers emptied out of yellow school buses and paraded her statue (a woman carrying her two eyeballs on a platter) through the four streets in town.”

Police officer Romeo also mentions how the towns are named after saints, suggesting the irony as the province is “staunchly secular.”

“Saint Lawrence, after whom the massive river that encircled Montreal was named, has been roasted alive. Sainte Agathe had refused the advances of a Roman perfect and for that had her breasts cut off. Saint Hippoltye had been torn apart by horses.”

We learn that maybe you shouldn’t drive in Quebec.

“She made the first hair-raising turn onto the 329, accelerating like a torpedo not to get rear-ended. Driving in Quebec was unlike anywhere else, really. Crosswalks? Don’t even think about it. Drivers tried to hit people in them.”

Hockey gets mentioned, although Remeo admits not liking the sport: “All Canadian boys were supposed to play hockey. It was something that was never questioned. It was like baseball to Americans. Soccer to Latin Americans. Cricket to Indians.

“Romeo’s shameful secret was that he never liked hockey. He didn’t see the point of chasing a puck for hours and hours on end. He didn’t like the hyper-masculine bravado of the coaches and the desperation of the fathers for their sons to be the best. Every Quebecois boy was supposed to dream of playing for the Montreal Canadiens, and every father seemed to think it was a possibility.” 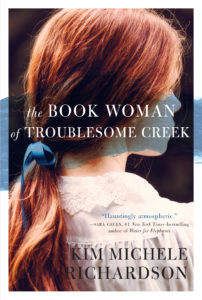 Book Woman of Troublesome Creek is set during the Great Depression.

The Book Woman of Troublesome Creek

The Book Woman of Troublesome Creek by Kim Michelle Richardson ($22.99, HarperCollins Canada) is set in 1930s Kentucky at a time when people were out of work and starving. Then U.S. president Teddy Roosevelt created jobs to help get people working including the Kentucky Pack Horse Project, which saw mainly women deliver books and other reading materials to some of the hardest to reach places in Kentucky. One such woman was Bluet, nicknamed for her blue skin.

Despite the hardships and sadness – and there is lots in this book – there is also beauty as Bluet appreciates her home and it shows in her descriptions of the places she travels to deliver her books.

“At the mouth of the woodlands, Junia (a mule) rooted herself to a halt and perked her ears. After a bit of coaxing, I urged her on into the belly of the woods. Inside, dark earth, leaves, rotting logs and crawling moss rose among the pine saplings, cottonwoods and honey locusts and the canopied the beaten path, pulling me deeper into my thoughts.”

Book Women travelled through tough parts of the countryside to deliver their parcels of books, magazines, and newspapers, but after going through woods and streams, Bluet finds herself on Lovett’s Ridge:

“Layers of dark-blue mountains stacked in the distance, at every turn their cuts rolling, deepening, then lightening to shades of blue-greens from the day’s passing clouds. The air blew fresh and breezy. Scents of apple blossoms lifted from a nearby tree, and honeysuckles clung to a crumbling split-rail fence as swallowtails and fat-legged bees flitted above the old timbers and dipped for nectar. Ii was a alive. You could feel the heartbeat of this mountain…”

“Women carried cakes, pies, and tasty eats and arranged them on red-checkered cloth tables. Menfolk sliced watermelon and made a dandy spread of deer sausage and other game they’d trapped for the festivities. Folks gathered at the Company store to chatter. Families claimed patches of grass in shady spots and spread out quilts and baskets groaning with prized recipes.”

A copy of these books was provided by HarperCollins Canada and Second Story Press
for an honest review. The opinions are my own.

A Summer of Beach Reads

Say Cheers and Get Sociable in Halifax!