As many of you may remember, 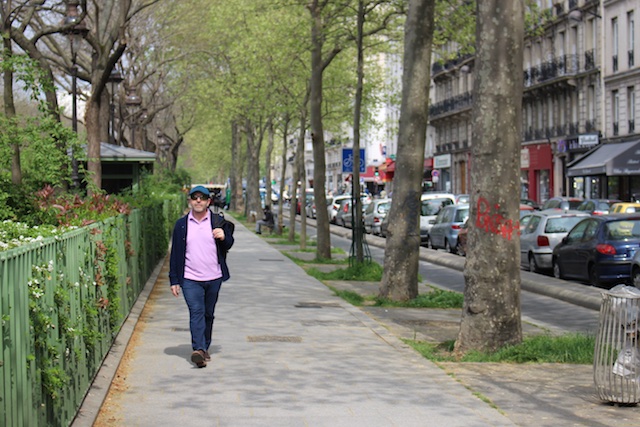 John on a stroll in one of favourite places, Paris.

last year on May 22nd, we adopted a handsome barn cat from my best friend Lucy, in part to add a bit of a distraction for the next six months of dealing with John’s recent cancer diagnosis and potential treatments. Little did we know that John would leave us just four weeks later.

But I had another motive. I secretly hoped that Hastings (named for a former actor who was known for his grand and bushy eyebrows), would be present at the moment of John’s passing; absorbing his love and spirit as he left us stumbling behind.

I had not thought of my secret intent until yesterday.

I discovered Hastings constantly at my side over the last, perhaps two weeks, suddenly running to the door to greet me with a chirpy chirp; especially if I had been in Toronto overnight for an event. He would come and sit in the bathroom with me while I showered. Place himself under the coffee table, unobtrusive and unnoticed, while I watched TV. Along with Ariel and Sophia, plop himself onto my chest during our afternoon nap. Silently protecting me. It was almost like he was on guard; guarding me against potential hurt or harm. Protecting me from the pain of grief. Even, on occasion, standing guard against Sophia and Ariel. (who also appear to be ‘on guard’, loving, kissing and looking after me).

Others had seen John in the past 10 months: a floating happy face balloon and a wayward walnut suddenly appearing in my Brother and sister-in-laws suburban Burlington backyard. Both swearing it was John.

I was not so fortunate.

John is alive and well in Our Lord Hastings (because Hastings is truly Lord-like). I sat down with him last night and had a good talk, sometimes yelling ‘honey’! at Hastings, who was looking perplexed with all the hugging and crying. All to say that Our Lord Hastings has not lost any of his precocious personality: he is still an uber-male, hates being kissed, picked up and loved. But I can feel John with me. Guarding me. Loving me.

But my secret intent apparently worked. A bit of happiness on this terrible anniversary. RIP honey. See you at nap time.

My Webspot: Wireless Internet in my Pocket

A Dandelion and a Daisy: Les Jardins de Métis