I suppose it’s fitting – if you live close to Toronto – that this month’s books have me travelling to two places covered in snow, Ireland and New Hampshire.

The Christmas Party is set in Ireland.

The Christmas Party by prolific writer Karen Swan ($24.99, PGCBooks, Pan Macmillan)  is set in a fictitious village in southwest Ireland. While the location may be made it up, the storyline – the last remaining knight of Ireland dies leaving his wife and three adult children, who are trying to ensure their home survives – is based on a true story the author found in a magazine. So while Lorne Castle may not exist, I suspect Swan’s descriptions of the castle are pretty accurate of others found in Ireland.

Willow “could see it already now: the grand stone pillars topped with flying eagles, the ornate black ironwork gates pinned back as through in readiness for her arrival, although in truth they were rarely closed.”

At the beginning of the book, Willow, the youngest of the siblings and the one who suddenly runs off to Dublin, leaving the castle and her family behind, is racing back to see her father, who is dying. She drives through her family’s estate and marvels at the beauty of the countryside.

“The sky opened up like a thrown-out tablecloth, the parkland rising and falling with careless grace, acres of frost-stippled grass interrupted only by ancient yews with thick boughs so heavy they grew along the ground…A lone stag nibbling on a rowan tree lifted its head.”

But it’s the plane tree that brings back the most memories for Willow.

Willow “bombed out of the village and along the narrow lane where the plane trees reached towards one another and touched fingers overhead. She had used to love cycling beneath them on the way home, her bike wheeling through the pools of golden evening light that somehow managed to penetrate the dense canopies…When she thought of home, which wasn’t often these days, this arched view through the tree tunnel was one of the most wistful – and certainly one of the better ones – that came to mind.”

Lorne Castle sits on the jagged coastline of Wild Atlantic Way, a 2,500-kilometre coastal road, that runs through a number of places in Ireland. While beautiful with its moss-covered rocks and view of the ocean, it was also cold, particularly in the winter with the wind and sleet.

“(Ottie) closed her eyes, easily conjuring the image of (her late father) walking across the field towards her, one hand planted on the top of his head to keep his flat cap on, cheeks ruddied, bright green cords tucked into wellies.”

In the book, the Lorne estate was part of an ultra marathon route where runners would “run along the top of the cliffs, exposed to the wind, but wide and firm underfoot at least, but here the path dropped fifty feet below the summit and was dug into the sides of the cliffs, rendering it bother narrow and prone to erosion.”

The ocean in this part of Ireland was always present and always powerful.

“Snow lapped up to the very fringes of the sand, the long fronds of tufted grass-like frozen wands pointing into the air. The sea was a stormy battleship grey today, white horses tussling in the bay, towering clouds rolling overhead.”

There is always beauty.

“With the Atlantic storm finally passed over, the colours were blooming again – the pale washed-out greys and misty tints over the weekend restored to their authentic bold, dramatic shades of pine green, granite black, liquid silver and powder blue. After its dramatic toss and hurl in the high winds all weekend, today the sea moved like a lung, breathing in and out, up ad down, gulls flocking around the mouth of the cave just by the headland as the fisherman on a small boat pulled up the lobster pots.”

And you can’t do Ireland without a trip to the pub for a Guinness.

“Ottie watched as (Ben, an American) took a mouthful, his eyes closing…’Oh…yeah,’ he breathed , looking at the pint again looking at her nodding appreciatively. ‘Well worth the wait.’ She grinned. Him saying he hadn’t liked it would have been tantamount to saying he didn’t like Ireland. Or the Irish.”

We leave the ocean and Europe and head to a small town in New Hampshire, where there is lots of snow. 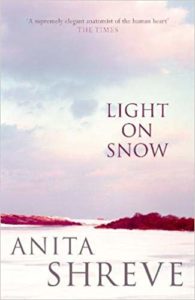 Anita Shreve’s Light on Snow has us travelling to New Hampshire.

Light on Snow by Anita Shreve

“Through his shop window and just beyond the pines, I can see a sliver of lake – green glass in summer; blue in fall; and in the winter simply a wedge of white. To the left of the lake is an abandoned skill hill with only three trails…Beyond the clearing my father has made, the woods grow immediately dense,” remembers Nicky, who lives in a remote house in a small New Hampshire town with her father.

In the summer, the woods are full of biting insects. And lots of raspberries, which Nicky picks and sells at the end of her lane.

Nicky and her father flee to this remote, snowy location after the death of Nicky’s mom and baby sister Clara, who are killed in a car accident. The pair leave behind New York, packing their belongings and start driving.

“The drive from New York to New Hampshire can be done in three hours, but it seemed to take far longer than that to reach our destination. My father drove up Route 91, the highway that runs between New Hampshire and Vermont, not even knowing what state we’d eventually settle in.

The pair go through a “bewildering interchanges” before the father realizes he was going south on Route 89 rather than north.

“The highway ascended slowly into small mountains with ledges of startling white rock. Waterfalls had frozen blue and there were still patches of snow on the north sides of the trees and houses.”

Through flashbacks, we see what life was like when Nicky’s mom and sister were alive and the family lived in the outskirts of New York City. She remembers her father’s office near St. Patrick’s Cathedral, in sprinting distance to Grand Central where her father would take the train home.

There were also trips into the city with her mom.

“…My mother would let me have the window seat so that I could gawp at the Hudson River, at the sheer rock face of the Palisades, at the expanse of the George Washington Bridge as we travelled into Manhattan. While her mother shopped, Nicky and her father would go to Central Park Zoo and eat cheese blintzes at a local deli.”

But the pair now live in New Hampshire with winter that never seems to end.

“The snow has turned to swirls of fine icy crystals that sting my face if I don’t keep my head lowered. The snow has covered the grasses and the small brush; it spreads in all directions with only the trees to break the panorama. Every pine bough and birch limb is covered with white. Bushes make humpy shapes, and the forest has lost the spindly scratchiness of early winter. We are socked in.”

But despite that there is beauty, particularly after a winter storm.

“From my vantage point on the floor, I see something I haven’t seen in days, a powder-blue sky shot through with pink silk…Daybreak comes fast in northern New England. I know that the sun will rise within minutes if not seconds. The sun rises over the top of Botthill and lights up the snow-covered woods and meadows with such an intense pink light that I slide out of my sleeping bag to see. The colour spills slowly across the landscape…For the three or four minutes that the snow is on fire, I want (a camera). Then so fast that it seems like a trick, the lovely pink is gone and the snow is white and bright and hard to look at. The sky deepens to the chrome blue of postcards. Only the tall pines show green.”

So much snow, but like Nicky, we just have to embrace it.

A copy of The Christmas Party was provided by PGC Books for an honest review.
The opinions are my own.

3 Beach Reads and Some Beaches to Read Them On