Summer in Stockholm or Bainbridge Island with Two Books

Summer brings a time to lift yourself from your armchair and return to travel.

But this month’s books offer more than inspiration to travel to a different location; they also help you escape your living room and help you enjoy another way of life – the beach life. 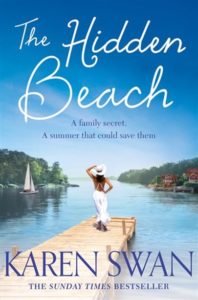 The Hidden Beach inspires you to summer in Stockholm.

This wonderful book by Karen Swan ($24.99, Publishers Group Canada, PanMacmillian) starts out in the bustling city of Stockholm where we meet Bell Everhurst who is working as a nanny for Hanna and Max and their children – Linus and twins Elise and Tilde.

“Bell loved the curious anomaly – the city’s smooth, ordered surfaces disrupted by a jagged poke of something older and wilder. Feral.”

But one day Bell receives a call that Hanna’s husband is awake. Turns out Hanna’s first husband fell into a coma seven years before. Hanna brings Linus and Bell to see the man her son doesn’t know is his father at a high-end medical facility in Uppsala, Sweden’s fourth-largest city.

“They stole away from the city, leaving Stockholm’s waterways and cooper roofs at their backs as they headed north on E4, passing beneath vast green signs and a rosy sky until the endless forest of pines lined the route.”

While Hanna seems familiar with the quaint community, Bell looks around at the “skyline pierced by the dramatic Gothic towers of a cathedral to the west. There were immediate similarities to Stockholm: the coloured buildings in red and yellow, every wall punctuated by multitudes of windows to maximize the northern light, and barrelled mustard roofs. But unlike the capital’s wide, pale roads, here the streets were cobbled and shaded with a froth of the trees; and the city was bisected not by the sea but a rushing river with cafes strung along its bank.”

The first meeting doesn’t go well, but Bell doesn’t have time to think about it as she helps the family prepare for summer on tiny islands of the archipelago.

“Many families had left already; the surplus of empty parking spaces was the signature of summer in the capital.”

The family arrives in “Nybroviken port, a horseshoe-shaped basin, flanked on all sides by the city’s grandest luxury hotels.” Hanna, Bell and the children take the ferry, leaving behind first Stockholm’s colourful buildings, which give way to tower blocks and duplexes and finally larger, suburban homes.

“Bell felt the equation shift quickly, the solid mas of urban sprawl diminishing against the mercurial body of the vast sea, land breaking down into crumbs until it was water, water as far as the eye could see.”

The family takes the two-hour ferry ride, with Bell returning her glaze to the archipelago.

“It was impossible not to. There were so many tiny, almost fragment-like islets and islands and skerries – Kris had once mentioned a figure of 30,000 – that on a map, they looked like smashed glass on a stone floor. Some were nothing but smooth rock plateaus, breaching the glassy surface like beluga whales, others were fully forested and bushy, like distant, dark clumps of moss floating on the water.”

It is the Swedish way of summering – with their island cabins – that made Bell, who hails from the North Norfolk coast, fall in love with the country.

Some of the islands “were so incredibly tiny that there was barely enough room for a single-room cabin to perch on the rocks; clearly, electricity and heating and running water weren’t options. There was really nothing for the occupants to do but sit on the shore and read, fish, swim and watch the boats go by.”

The island the family calls home for the summer is small compared to some, taking 15 minutes to walk around, whereas larger islands could take an hour and the smallest, mere minutes. The family docks at Sandhamm, before taking their own boat to their island. Bell recalls the previous year’s summer with Linus where they kayaked through the sapphire blue waters around the islands and coves, looking for orcas and herons.

But what Bell loves best about these islands is its wildness, the scruffiest.

“The place had a rustic, low-key vibe that was the antithesis of slick city living, and the people coming out here, right on the farthest edge of the country’s landmass, weren’t just getting back to nature, they were getting back to themselves.” 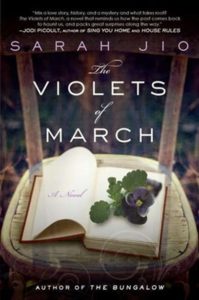 Be inspred to visit Bainbridge Island in the summer to heal.

The Violets of March

Within a few pages of The Violets of March by Sarah Jio you are swept up in the beach lifestyle of Bainbridge Island in Washington State and can’t help but love the main character Emily’s eccentric aunt Bee, who lives in an old house there.

“The place was kind of ethereal with the seagulls flying overhead, the sprawling gardens, the smell of Puget Sound, the big kitchen with its windows facing out onto the gray water, the haunting hum of the waves crashing one the shore,” Emily, a writer with a major case of writer’s block, reminiscences about summers spent as a child on the island. She decides to go back of a visit (“a wonderful place to heal”) after her marriage fails, acknowledging: “The Big Apple is a fair-weathered friend. The city loves you when you are flying high and kicks you when you are down.”

Despite the years between visits, Bee welcomes her niece back to the island, which she says is absolutely alive in March.

“I knew what she meant when she said it. The churning gray water. The kelp and the seaweed and barnacles. I could almost taste the salty air. Bee believed that the Puget Sound was a the great healer. And I knew that when I arrived, she would encourage me to take my shoes off and go wading, even if it was one o’clock in the morning – even it if was 43 degrees, which it probably would be.”

Emily takes the ferry into Eagle Harbor, passing homes that “clung courageously to the hillside” thinking about the eclectic bunch who call the island home – mothers with executive husbands who commute to Seattle; reclusive artists and poets; and several former Gilligan’s Island cast members and she acknowledges it’s a “good place to get lost.”

Bainbridge Island is 10 miles long, but “feels like a continent in its own right. There are bays and inlets, covers and mudflats, a winery, a berry farm, a llama farm, 16 restaurants, a cafe that makes homemade cinnamon rolls and the best coffee I’ve ever tasted, and a market whose wares include locally produced raspberry wine and organic Swiss chard picked just hours before making an appearance in the produce section.”

As Emily steps off the ferry she is greeted by Bainbridge’s Island smell: “seawater, ferry engine fumes, decaying claims, and trees…”

Bee’s house is close to the beach and it’s the sound of waves crashing that wake Emily the next morning and the breathtaking view of gray-blue water, patchwork of sandy and rocky shore makes her wish she could dig for clams, lift of rocks and look for crabs or just start swimming. Instead she trudges through the marshy sand, “the feeling of squishiness below the feet signalling the brain that it’s OK to let go for a while.”

A copy of The Hidden Beach was provided by PGC Books for an honest review.
The opinions are my own.

6 Summer Wilderness Destinations You Must Discover